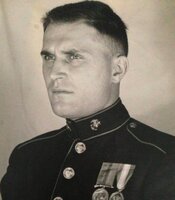 William A. Garrison, age 92 passed away peacefully on September 28, 2022 at St. Joseph’s North Hospital in Tampa.  He was born on September 24, 1930 in Baltimore, Maryland, the son of Archibold and Adelaide (Parsons) Garrison.  William served his country proudly during the Korean War as a Sergeant in the United States Marine Corps.  He loved being around people and sharing his stories with everyone who listened.

Surviving are his children, Mark, Rosemarie and Stephen; Grandchildren, Riley, Cody, Rachael, Tyler, Jordan and Olivia; Nephews, Michael, Richard, Raymond and William and several grand nieces and nephews, family and friends.  He was preceded in death by his parents, Archibold and Adelaide, his beloved wife, Martha and his brother, Donald.

A gathering of family and friends will be held on Thursday, October 6, 2022 from 9 am to 11 am at Florida Mortuary Funeral Services, Tampa, Florida.  A committal service will follow at 12:30 p.m. at Florida National Cemetery in Bushnell, Florida.