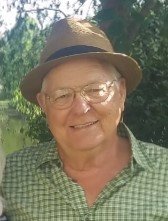 Robert E. Fink of Tampa, FL passed away peacefully on September 10, 2020 at his home with his family at his side. He was born June 7, 1938 in Wooster, Ohio and lived there until he was 19 years old. He moved to Bradenton, FL with his wife and children in 1957 to work for Tropicana as a truck mechanic. In 1964 the family moved to Tampa where he had a long career in the trucking industry as an owner-operator in central Florida. His passion was building and racing vintage stock cars through-out the southeastern United States. He loved his family and racing. He is survived by his wife of 65 years, Judith Fink and his children, Bobbi Jeanne,  MeLisa Anne, Thomas Daniel and preceded in death by Suzanne Elizabeth. They have 6 grandchildren and 9 great grandchildren who cherish the years spent together with their Opa. His remains will be spread partially in his ancestral cemetery in Ohio and Oak Grove United Methodist Church cemetery in North Tampa where he will rest beside his daughter and his parents. The family would ask donations be made to Hospice of Tampa.

To send flowers to the family or plant a tree in memory of Robert Fink, please visit Tribute Store

Share Your Memory of
Robert
Upload Your Memory View All Memories
Be the first to upload a memory!
Share A Memory
Send Flowers