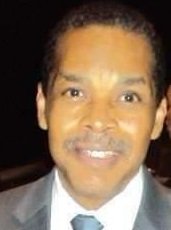 grew up in Baton Rouge, Louisiana where he lived with his parents and

sister, Selerya Moore until he became a member of the Bison family at

Communications and quickly began an adventure exploring the world of

Journalism from Washington D.C. to Florida, Louisiana and back to

Florida where he settled roots. He married the love of his life Sherry

(Fitzpatrick) Moore on June 28, 1986 and embraced a beautiful bond

with daughter, Janeen (Fitzpatrick) Freeman as well as Stepdaughter,

Mia Lucas; whom both learned from him how to live life to the fullest with

kindness and selflessness. Rugene also expanded their horizons by

exposing them to various forms of art, culture, literature, and music.

With his bold and quick witted sense of humor, Rugene never met a

compassion and love through his amazingly colorful stories. Always up

every situation with optimistic encouragement that no matter what all is

well. All were welcomed to share a seat at his table to experience the

pickiest palette this side of the Bayou. His larger than life smile, love of

missed by all. Rugene F. Moore was a caring and loved husband,

Rugene is survived by his wife, Sherry (Fitzpatrick) Moore, sister,

As well as Specially bonded cousin, Joan Moore, amongst several other

family members from blood related to in-laws of mothers, brothers,

sisters, cousins, nieces, nephews and a multitude of lifelong friends. He

is preceded in death by his parents; mother, Ollie (Butler) Moore and

To send flowers to the family or plant a tree in memory of Rugene Moore, please visit Tribute Store
Thursday
22
April

Gathering Of Family and Friends

Share Your Memory of
Rugene
Upload Your Memory View All Memories
Be the first to upload a memory!
Share A Memory
Send Flowers
Plant a Tree