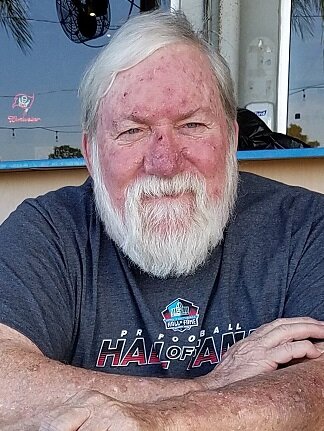 Trainor, James Ernest our brother passed away on February 7, 2022. His big heart got him before anything else could. He was a native of Tampa as was his father whose father before him arrived in town shortly after 1900. Born on November 1, 1950 he picked me up, beat me up, and elevated me up a place I do not deserve. He was predeceased by our parents James and Yolanda and his wife of 30 years Annie. After Oak Grove Jr. High, he attended Leto High School and was a 1968 graduate of their Charter Class.

He went on to be a proud Union Millwright, and Past President of Millwright Local 1000. He served on numerous committees including the Negotiating Committee that initiated the locals Annuity Fund. He was a Council Representative for the Central/North Florida Carpenters Regional Council serving the needs of Local 1000.

He became an avid race fan at an early age when he attended the first 500 held at Daytona International Speedway. His interest in racing carried him into many venues of the sport. In the 70’s he was a lead member of “The Animal Camp” group that attended the 12 Hours of Sebring. This group was also involved in the historic event of building a dirt track indoors at the then named Florida Suncoast Dome (now Tropicana Field) which hosted a World of Outlaws event. We attended the Indianapolis 500, Knoxville Nationals and numerous IMSA and NASCAR races throughout the country. When his brother went racing, so did he.

Serving as spotter, mentor, and critic.

He loved his Gators and bled Orange and Blue. He enjoyed life to its’ fullest and lived by his motto; “Every night is Saturday night and every day is Sunday”. By passing he relinquishes his seat on Sympathy Corner at Ricks on the River at Happy Hour. He is survived by his brother Mike and wife Debi, Shelby and Seth.

His sister Donna and husband Lowell, and their daughter Lucky.

Come celebrate Trainor in style at his office at Ricks’ on the River on Sunday March 13, 2022 from 2pm until 4pm.

To send flowers to the family or plant a tree in memory of James Trainor, please visit Tribute Store
Sunday
13
March

Share Your Memory of
James
Upload Your Memory View All Memories
Be the first to upload a memory!
Share A Memory
Send Flowers